So as promised last time, today I'm going to talk to you about drawing, and even more precisely about inking techniques and timed tests.

I had been thinking for months about making a black and white illustration and inking it several times with different techniques while timing myself to see which one was the fastest. This approach is part of my search for optimization in the time it takes to produce my comics.
So there are all the drawing tricks, 3D, Clip Studio Paint's tools, the programs and softwares developed by myself with which I saved a lot of time, but there is still this inking phase whose execution time tends to resist any form of compression.

At the beginning of the year 2021 I made a penciled illustration, and it seemed to me to be a perfect candidate for the exercise: a character, scenery elements and various texture effects.
The illustration in question: 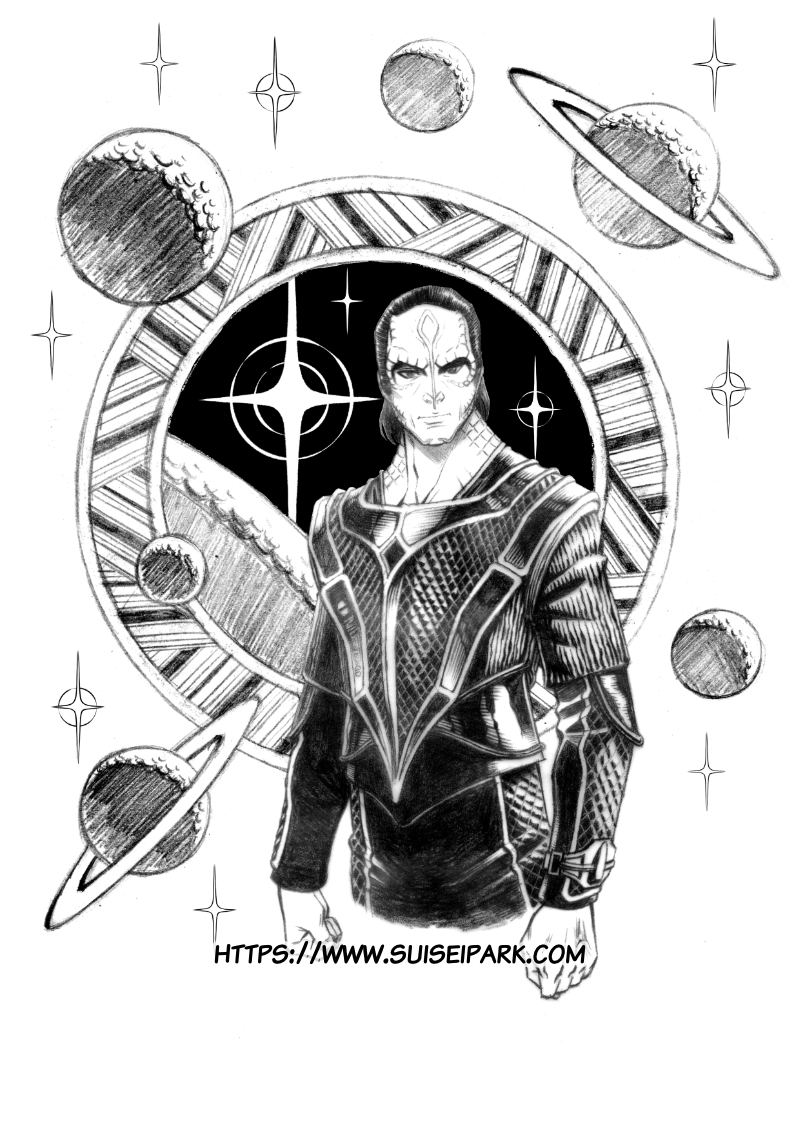 To introduce you a little bit to the man, it is Gul Dukat a villain from the Star Trek: Deep Space Nine series, a humanoid alien with some reptilian attributes. This is my favorite character of the show.
You know me now, I like charismatic bad guys with complicated stories. x)

Let's go back to the illustration itself.
Concerning the pencil phase, I refined it more than necessary, but it's because I wanted to make a beautiful illustration and it was my pleasure. That said, I still used some tricks to make the work easier.
Basically, I drew the different elements of the illustration separately and then scanned and assembled them by computer. This allowed me to draw them carefully without getting bogged down in their interaction and optimize the final composition. 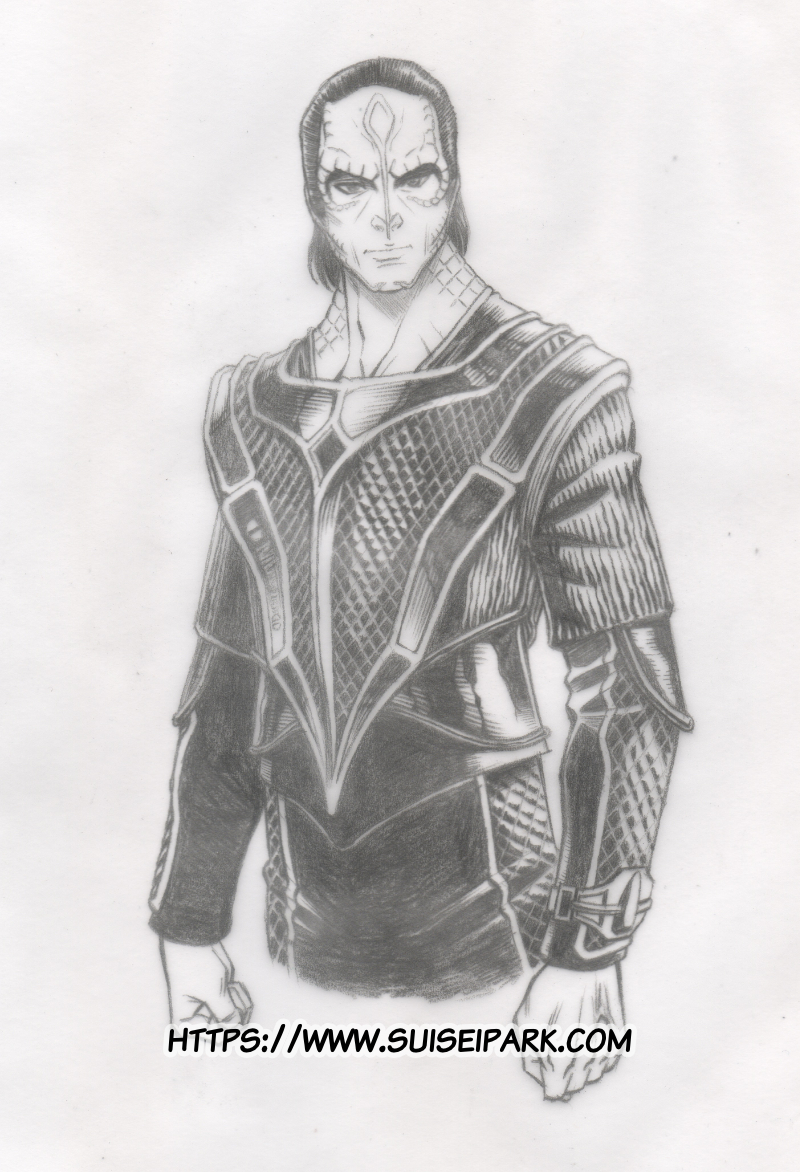 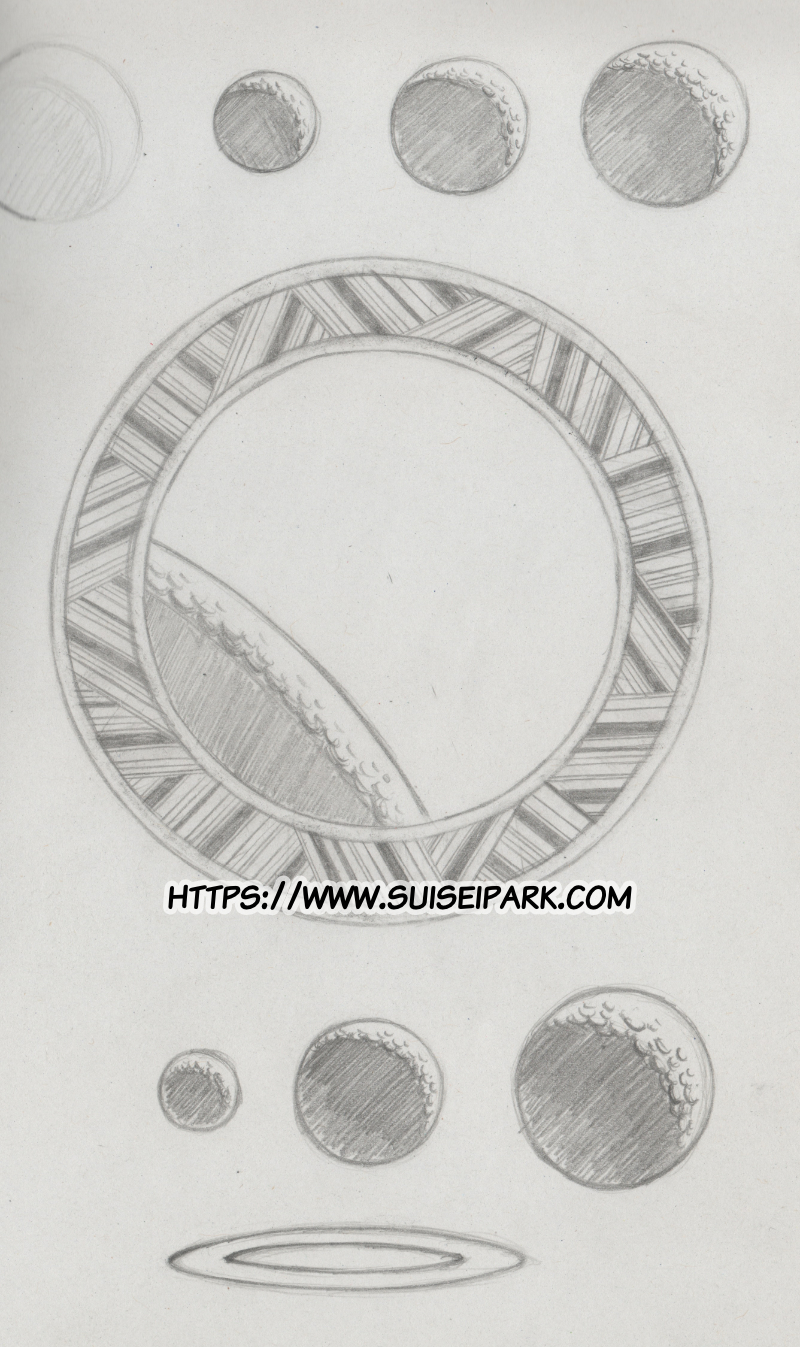 Then I printed copies of the final composition that I have already shown you in magenta for my timed inking experiments.
I have made exactly 6 versions of them, as follows. (You can click on them to enlarge them). 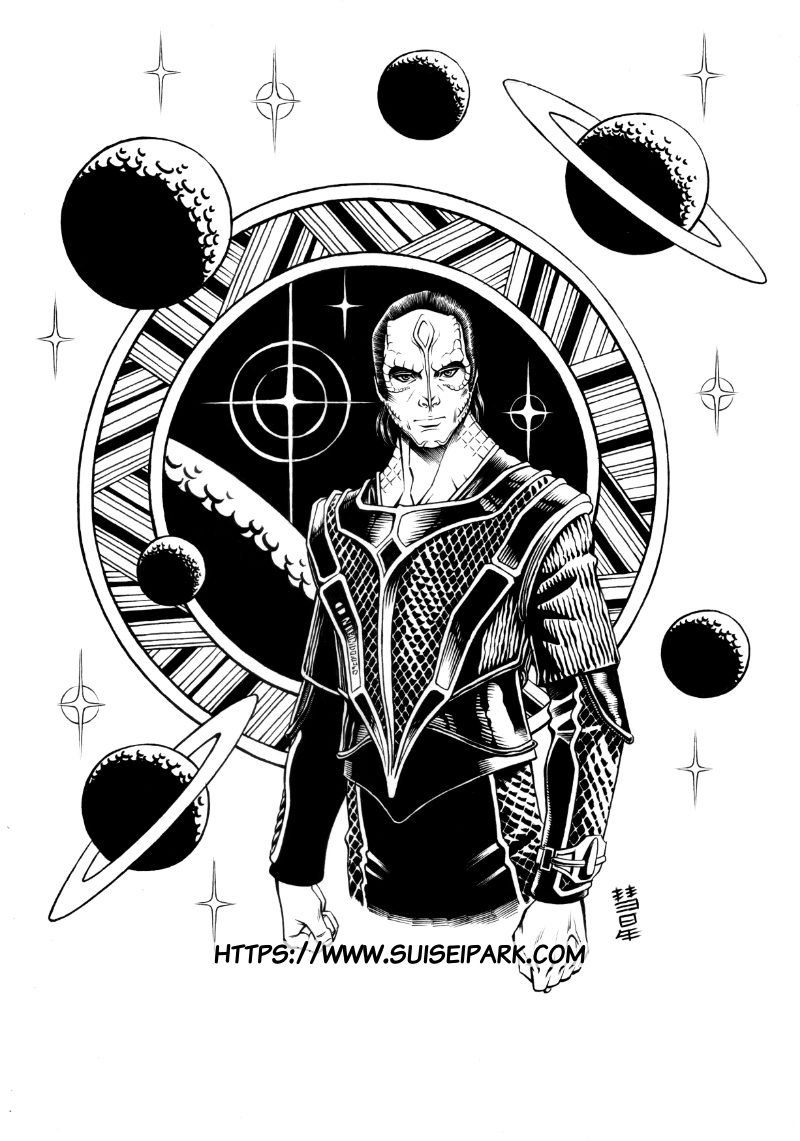 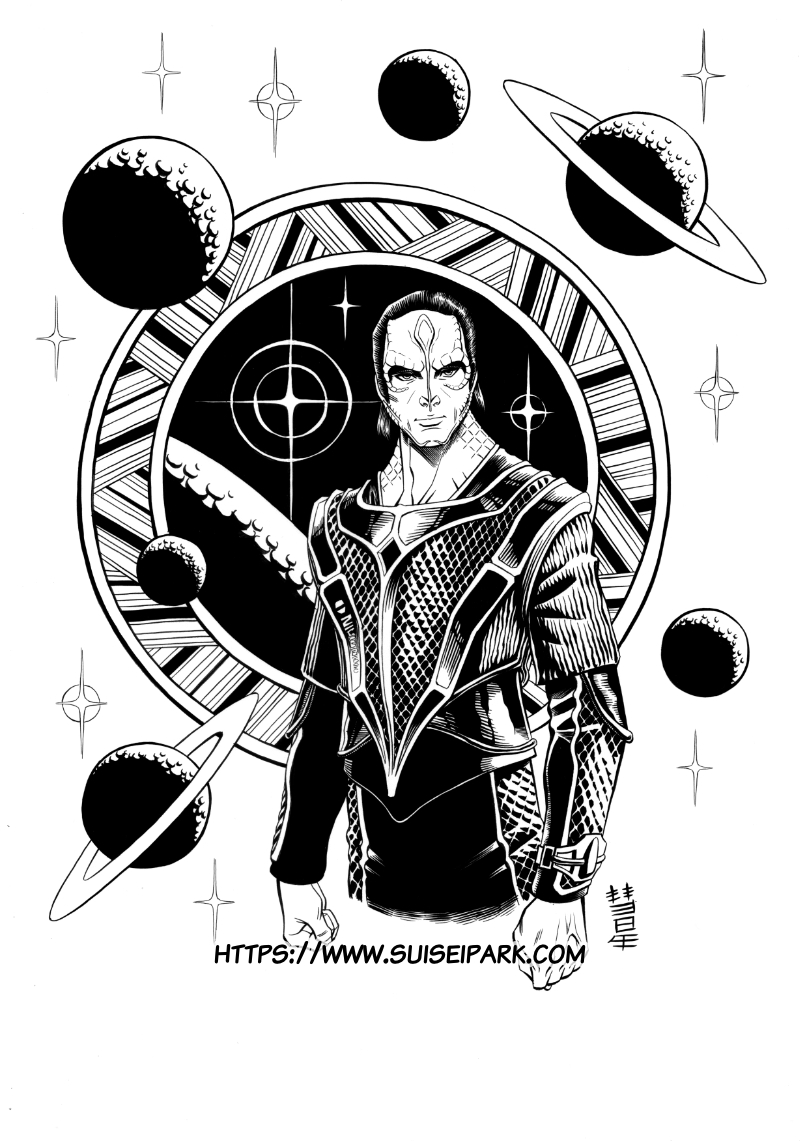 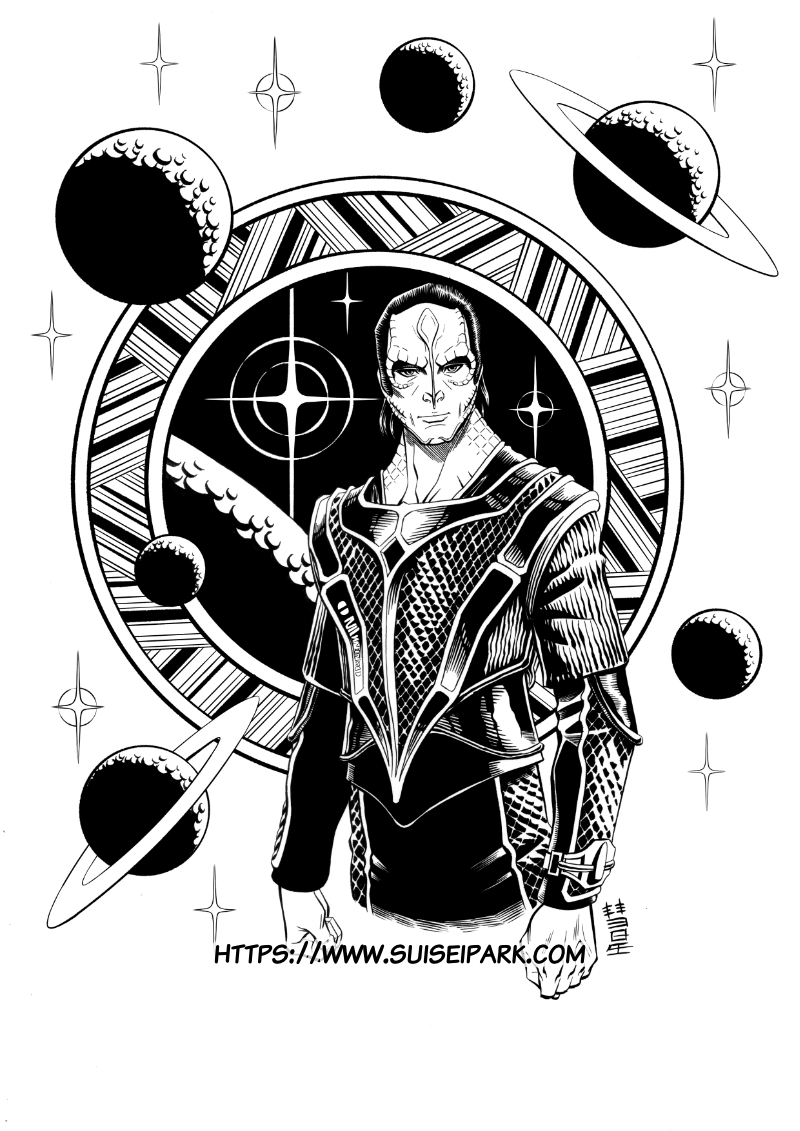 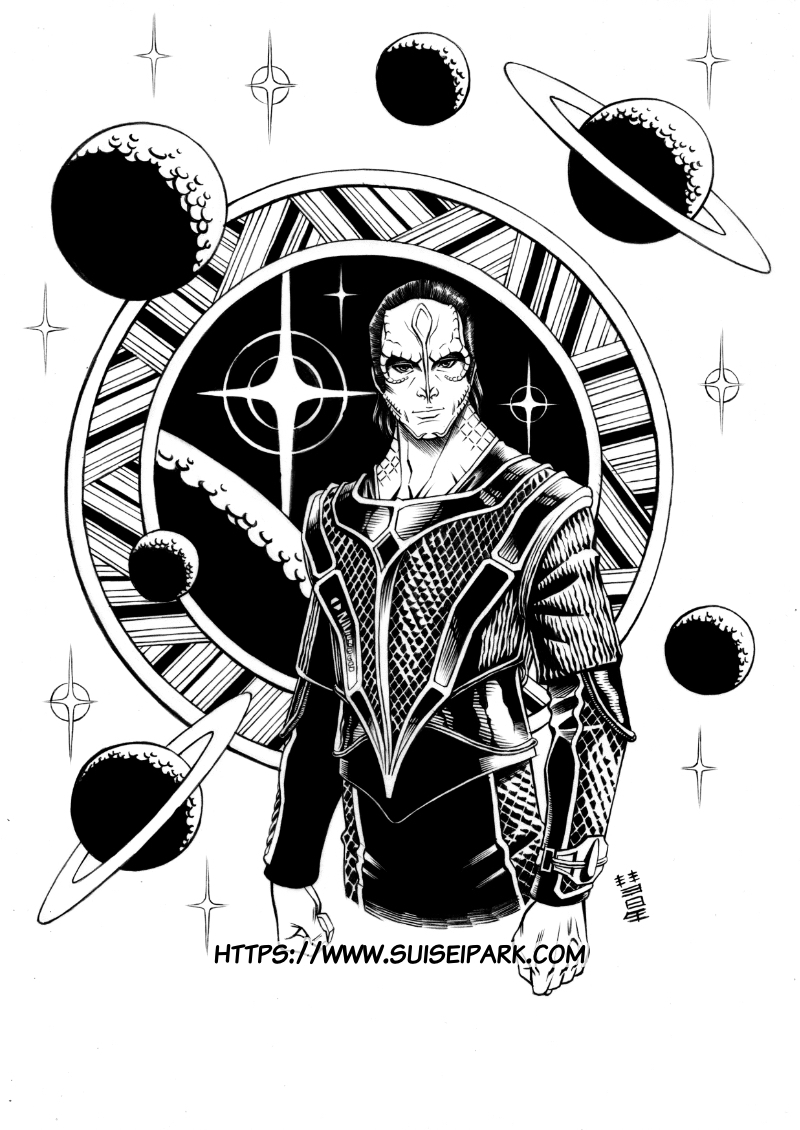 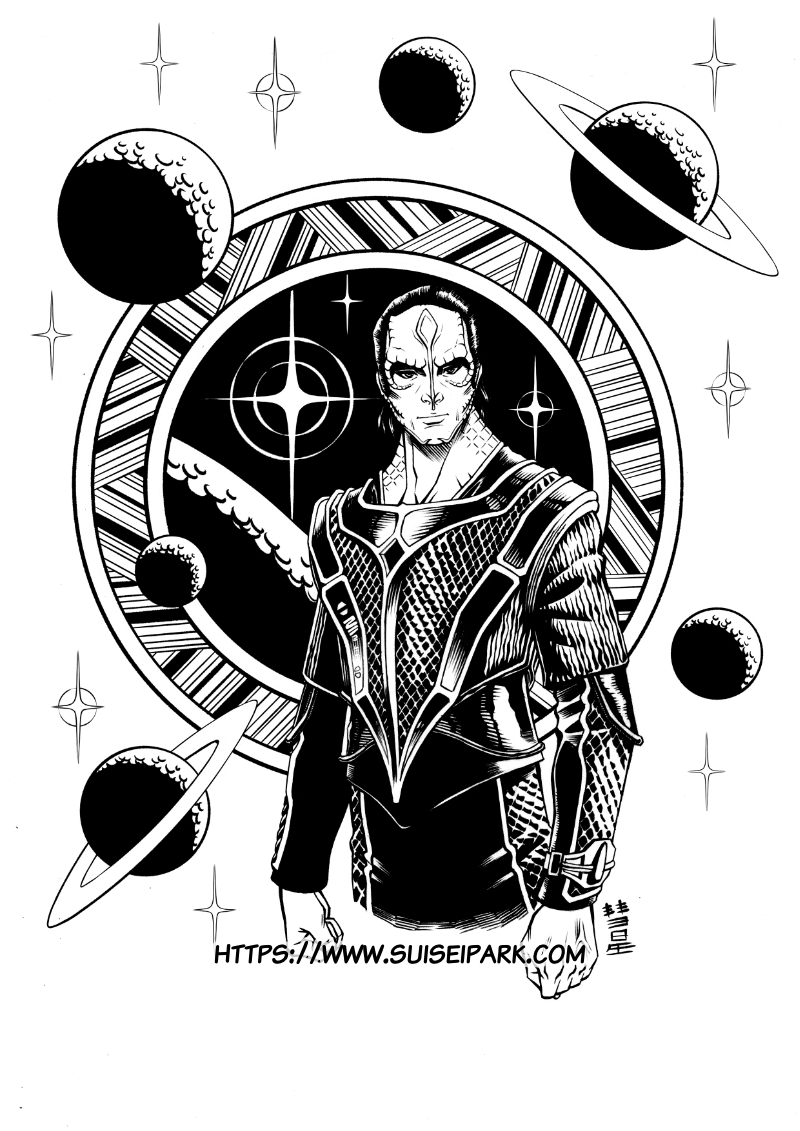 Well, if you have the impression to see 6 times the same thing, it's normal, the goal is obviously to have an identical or almost identical result with different methods, the finality being to get the fastest one to use it on my next comics projects.
Let's go through them to dissect the different methods.

The first version, I made it with liners.

It took me 5 hours. The main drawback of this method is that the clip on the liner cap presses on my « comic artist ball ». A callus ball that formed on my middle finger over time by dint of drawing, where the pencil rests. And after a while it's painful, so it limits the duration of the work sessions. 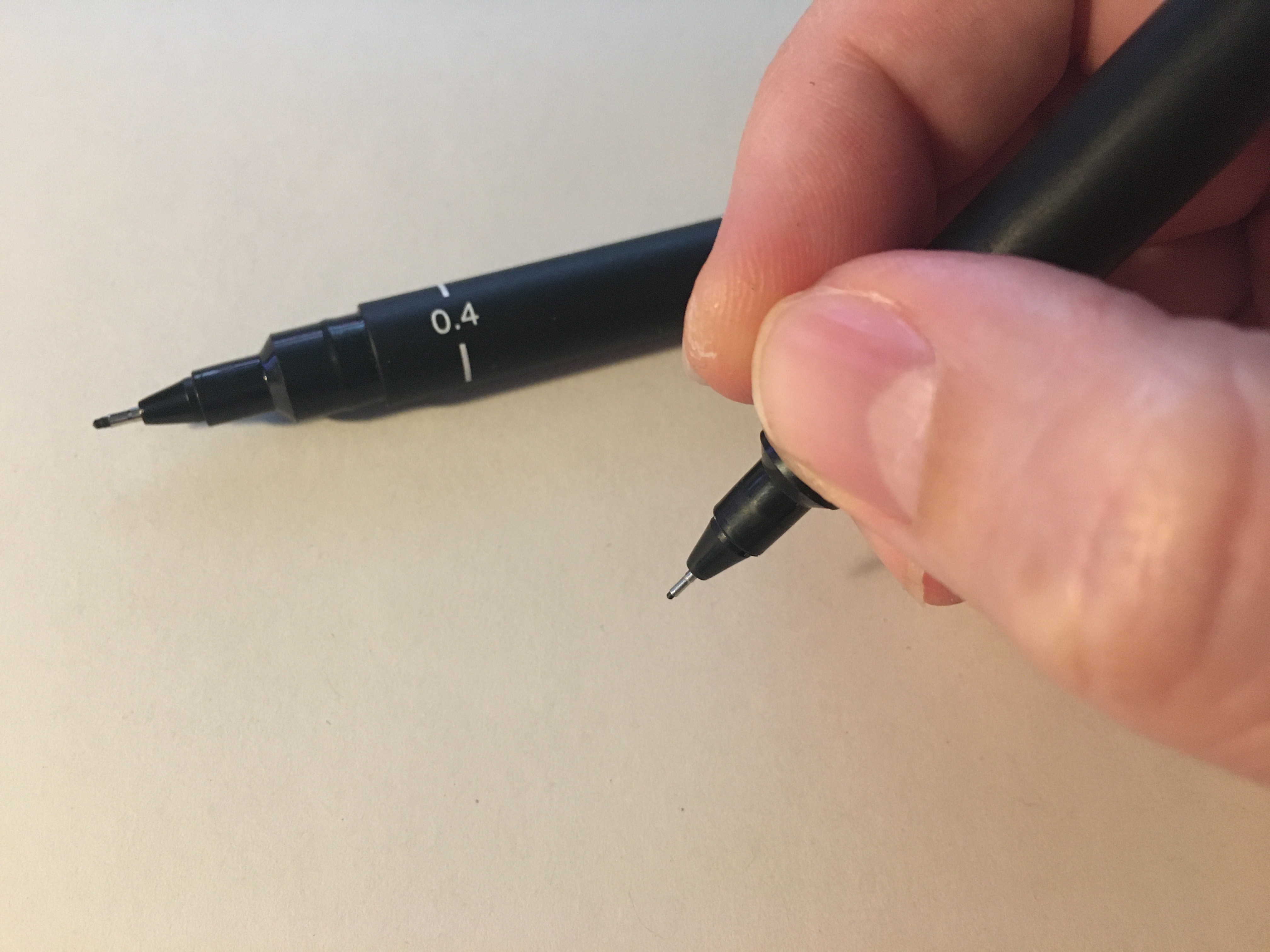 Then comes the brush version.

This is the version that took me the longest: 6 hours and 20 minutes.
The main waste of time is during the inking of the background. It has many geometrical shapes and the brush is unsuitable for that. On the other hand, for the character, it goes just as fast.
In any case, the holding of the brush is pleasant, the handle is thin, so it never hurts me. I can work as long as I want with this technique.
It is difficult to evaluate at this resolution, but overall the lines drawn with the brush are cleaner and sharper than those drawn with a liner.
So! Longer, but prettier and more pleasant. 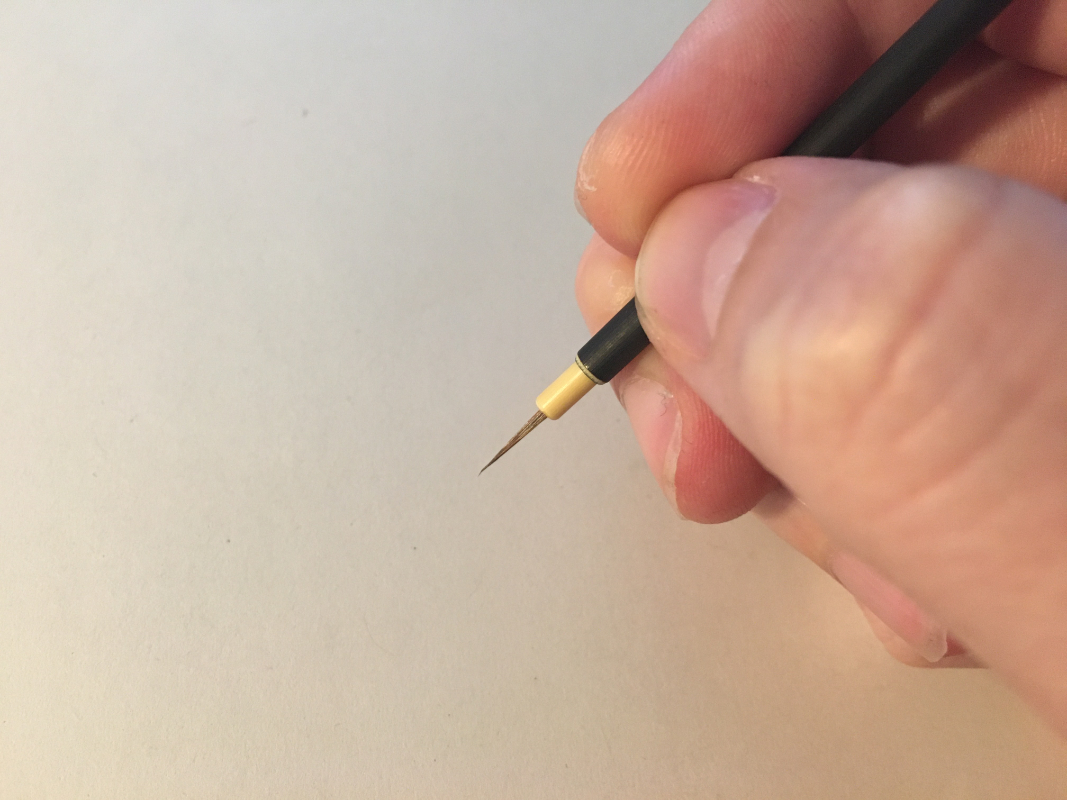 Then, the 3rd version I made it entirely with the graphics tablet and the software Clip Studio Paint.

This attempt is the fastest so far: 4 hours 15 minutes.
The inking of the character does not go faster the flaw being that the pen slides much more easily on the tablet than a traditional technique on paper, so it is more difficult to control the line and I use a lot of ctrl+Z. Moreover, the pen tip does not deform under pressure, so it is more difficult to anticipate the width of the line and you have to repeat the process several times.
The big advantage on the other hand is for the background and its geometric shapes (circles, parallel lines, ellipses). The rulers integrated in Clip Studio Paint allow you to draw them really quickly and cleanly.
Also, for all textures and particle effects, I created a lot of brushes for Clip Studio Paint. So, I only had to make a click to draw each of the stars.

As on this version I had the impression that I was wastig time on the character, so I decided to try a hybrid technique: the brush for the character, the CSP for the rest.

This version took me as long as the one entirely digital. It seems impossible to reduce the work time on the character below 3 hours and I have confirmation that digital mainly saves time on the geometric patterns and elements and effects that can be drawn with brushes.

I leave these tests a few weeks and then I had a new idea.
Here is the result. I let you guess which tool I used, you have 4 hours before I pick up the papers. :p

Well, I stop making you marinate, here is the answer in picture. :p 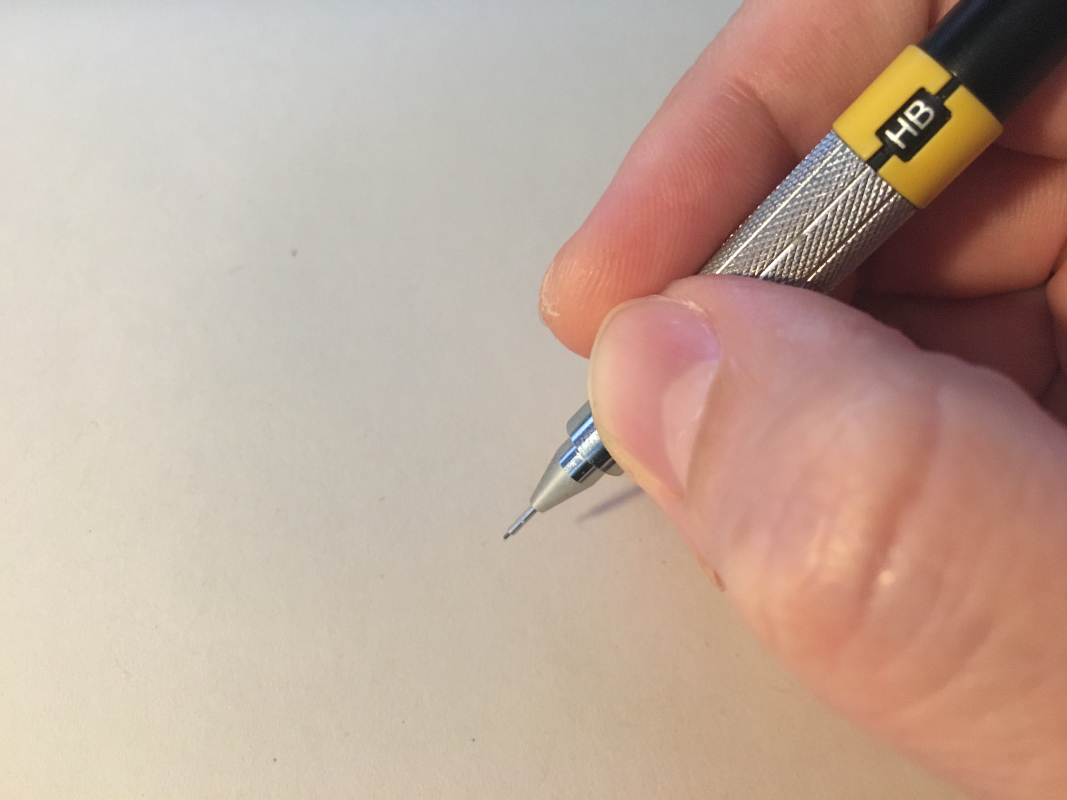 And yes! It's simply a mechanical pencil! :p
The idea was to see if I work faster than with the usual inking methods and if by playing with the contrasts in the scan I could make it look like inking.
For this version, it took me about 5 hours. I was a little faster for the character than the other attempts, but for the background, it's always the digital that wins hands down.
The problem with the mechanical pencil is that to have an intensity of black roughly constant is that I hold it strongly to press down enough for a long time and I ended up crushing my thumb, so I had a hard time finishing the background. I think it slowed me down quite a bit at the end.

So! No tool is perfect on its own.

As a result, I still had one last thing to test: making the character with mechanical pencil and the background with graphic tablet.

And this time I managed to go below 4 hours of work. :D
3 hours and 40 minutes more exactly.
I managed to ink the character in 2h20 then before moving to the background I had to do some cleaning up because of an unwise choice to do some textures partly in pencil and partly in digital. I think I have a way to spare a few more minutes of work by optimizing some choices.

I'm happy to have finally carried out these timed tests.
Used alone, there is no ideal tool. Now I know that, once again, it is in the hybridization of techniques that I will have to look for optimization.
I have the idea that in the future I should imagine a small roadmap to ink or at to clean my comic pages. I will put all this into practice in the next project.

That's all for today!
Next time I will make again a small compilation of our online Drink'N'Draw sessions.

Have a nice week-end and see you soon! :D